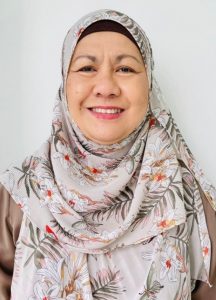 She received her early education at many schools in Malaysia as her father was in the army before furthering her secondary education at Sekolah Tun Fatimah, Johor Bharu. She holds a Bachelor Degree (English Language) with honors from UPM.

Later, she was awarded the Hadiah Latihan Persekutuan (HLP) from the Ministry of Education, Malaysia and continued her Master Degree in Science Library and Information in University of Malaya.

She has been teaching English for almost 35 years and now is the Head of The English Panel of Sekolah Sultan Alam Shah, Putrajaya. She is also one of the Master trainers for the newly introduced SPM English paper which is aligned to the Common European Framework for Reference (CEFR) for Putrajaya and conducts talks on Techniques to Answer the SPM and PT3 exam questions.

During her free time, she loves reading and watching movies.