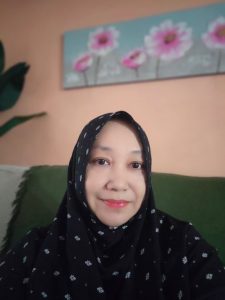 Adzuhaidah M.Taha is a Senior English teacher at Sekolah Seri Puteri, Cyberjaya with a passion for writing. She received her early education at SK Lebak, Temerloh, Pahang before pursuing her secondary education in MRSM Kuantan. She holds a Bachelor’s Degree (TESL) with honors and a Master’s Degree in English Language Studies from Universiti Kebangsaan Malaysia (UKM) wherein she graduated as the best student from the School of Languages ​​and Linguistics in 2004.

After being awarded the Hadiah Latihan Persekutuan (HLP) from the Ministry of Education, Malaysia in September 2011, she continued on to secure her Doctorate (Ph.D) in English Language Studies in 2015, specializing literature online learning, motivation and learning strategies. She dives into the writing and editing world when she became part of the panel of assessors in the translation and editing work ranging from CDs on innovation to the preparation of scripts for the English for Science and Technology CD Series with the Education Technology Division, Ministry of Education back in the early 2000s.  She also assisted in editing the Engineering Drawing Textbooks with the Textbook Division, Ministry of Education. Due to her background in research, she was elected the Master Trainer for the Fully Residential Schools International Symposium (FRSIS) involving all fully residential schools in the country.

She is currently the Master trainer for the newly introduced SPM English paper which is aligned to the Common European Framework for Reference (CEFR). Adzuhaidah is also actively involved in a range of collaborative projects including online writing projects under ASEF SchoolNet initiatives as well as UNESCO ASPNet  schools involving teachers and students in Asia and Europe. One of the projects she and her students had taken part in under the ASEF SchoolNet (i.e. Postcards from the Edge) in 2019 was awarded the Gold Award. In her line of work as a teacher, she has taken students on various school linkage and UNESCO heritage discovery projects in Japan, Italy, New Zealand, Turkey, Indonesia, France, South Korea and a few others.

As a researcher, she has produced a number of scholarly articles for reputable, scopus-indexed journals and publishers such as Elsevier, Akademika and GEMA Online Journal of Language Studies to name a few. Her latest article entitled ‘Awareness of the risks and dangers of social networking : Exploration in four types of Malaysian Secondary schools’ is featured in the 36th edition of the Malaysian Journal of Communication in March 2020. Occasionally, she becomes the reviewer for manuscripts to be published in the International Journal of Language Education and Applied Linguistics, Universiti Malaysia Pahang. On top of everything, she’s very passionate about her teaching career and spends much of her time preparing teaching materials and engaging with her most treasured clients – her students.